What is Colibri Colibri provides an alternative to KDE4 Plasma notifications. What I like about Colibri

Thankfully Colibri is now available in the Lucid repository

Once installed the following setup still need be done because colibri  would not start to work immediately.

NB: You may need to logout and login again for Colibri to take effect. If all goes well your Notification should look like this.

(k)ubuntu does not come pre-installed with multimedia codecs for popular formats like mp3, AVI, Dvix , Adobe Flash etc due to license restrictions Although it is very easy to install the codecs when you attempt to play an mp3 file for example, you get a popup prompting to install necessary codecs need to play the file. Even then I rather just have all what I need in one go.  Some of the codecs needed for playing popular multimedia codecs are so restricted that there are not included in the Ubuntu Repositories and one would need to add a 3rd party repository. Medibuntu repository  comes with many tools, codecs and applications which can not be shipped in the Ubuntu repository due to license restrictions.  It can be added to your software source with the following command.

Once added I usually just install just about every Multimedia Codec I would ever need on Kubuntu with the following command.

I would like to go through some of the multimedia apps I always resort to in my day to day use of kubuntu. For the most part I prefer to stick with Kde/Qt apps due to their integration with the rest of kde. But I always use the best tool for the Job Qt or Gtk doesn’t matter (As long as it is not too tired to gnome or need half of gnome desktop to install)

Soundcoverter Like the name suggests soundconverter is a small GTK app which reads anything the GStreamer library can read (Ogg Vorbis, AAC, MP3, FLAC, 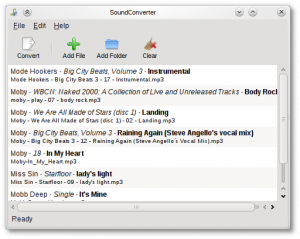 Winff Winff is a GUI frontend to FFMPEG, it converts any video file supported by FFMPEG and can all do multiple file convert i.e You can for example 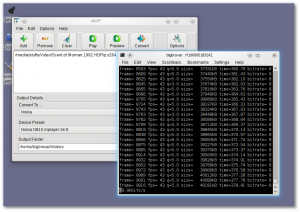 convert mpeg’s, flv’s, and mov’s, all into avi’s all at once. Just like Soundcoverter winff is very easy to use and also support 3rd party presets for Nokia and Android devices. The only flaw I found with winff progress indicator instead you get a commandline window which displays working of an encoding process in the most geeky way lol

Handbreak is a great app (some will say the best for the job) Personally though I prefer k9copy.  K9copy is a program that allows you to copy DVDs in Linux. It is similar to DVDShrink, and has the following features:

Video editing is not one of the strongest areas of Linux. However that trend is changing as more applications like openshot and Pitivi get matured and add needed functionality and features. However the best and most feature packed Video editor on Linux today is Kdenlive. The list of its features are so numerous that its better to just check them out yourself

Audacity is a cross platform open source software for recording and editing sounds. While Audacity would not be winning any award in UI design any time soon. It is indeed one of the most powerful open source sound editor out there.

Konqueror the default browser which ships with kde sucks, I wish there was a mild way to put that but really it does. And please don’t get started on Firefox its integration with KDE is just appalling.ReKonq is a decent browser but it crashes a lot and can be unstable. My browser of choice on kde is Chromium. Its faster, lighter and although a gtk app has better integration with kde compared to Firefox.

I am a heavy microblogger and you would find me on both identica and twitter. When it comes to microblogging on kde it starts and end with Choqok. Really there is nothing more to add here. 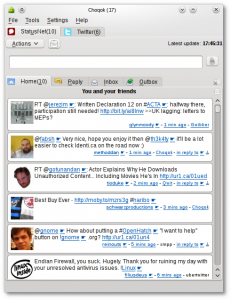 I am a fan of blogging client which allows me to blog even when am offline and publish my post when connected. Blogilo allows me to do this and much more. You might want to check out a review of the app I did I while back

Kubuntu ships by default Quassel IRC client. Which is a pretty decent IRC client, but I was never able to find my way round it.  For IRC I use Konversation which I find much easier to use and less cluttered compared to Quassel. Konversation has the following features 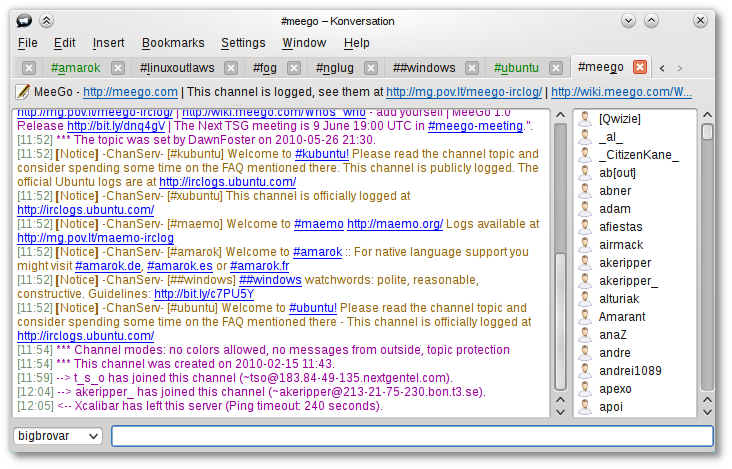 Kubuntu ships with Kpackagekit as package manager. Which is pretty decent but feels very incomplete and can be quite unstable compared to Synaptic. So I just go ahead and install synaptic

Note: The “–without-recommends” ensure that only the basic needed dependencies are installed with synaptic. I use this options anytime I am installing a gtk app. It helps to slim down the bloat so I get just what I need.

Other Apps I use on Kubuntu

The above applications are very popular and can be easily installed from the package manager.

My Kubuntu Tweaks and Customizations

Here is where I share some of the little tweaks and customization I did to the Out of the Box Kubuntu to make it further meet my everyday use case.

One major grip I have with the gtk toolkit is how gtk apps always look like some win95 era app when used outside of a non gtk enviroment. Thankfully the Kubuntu theme have done a good job Integrating it with Qtcurve which helps give gtk apps a kdish look and feel. Unfortunately gtk apps which are run as root aren’t covered and still always look like s**t. Hence if you run synaptic on KDE what you get is a tool that is so ugly it hurts.

My Walk around this was to install the gtk-chtheme package

Once installed alt + F2 and run the following from krunner.

The way I got it to work was to first select the “Releigh” Then select “QtCurve” you can also choose a fonts. Once done remember to click “ok”

When you start synaptic again it should look much better.

For some reason  the process for setting up a samba network share on Kubuntu is not as straight forward as it is on Ubuntu. Ideally If I want share a folder I should right click on it go to properties –> share tab and click configure sharing. Then the system asks me for my password and tells me it needs to install some packages before it can proceed, I say yes it installs the packages and my Samba share is done. Well the situation is quite different on Kubuntu. When I get to the part where I am suppose to share my folder, it asks me for my password and then nothing happens no error message, no sharing no feedback on what failed, everthing just seems normal except the fact  folder is also not shared.
I did some digging and found that I had to install the following packages 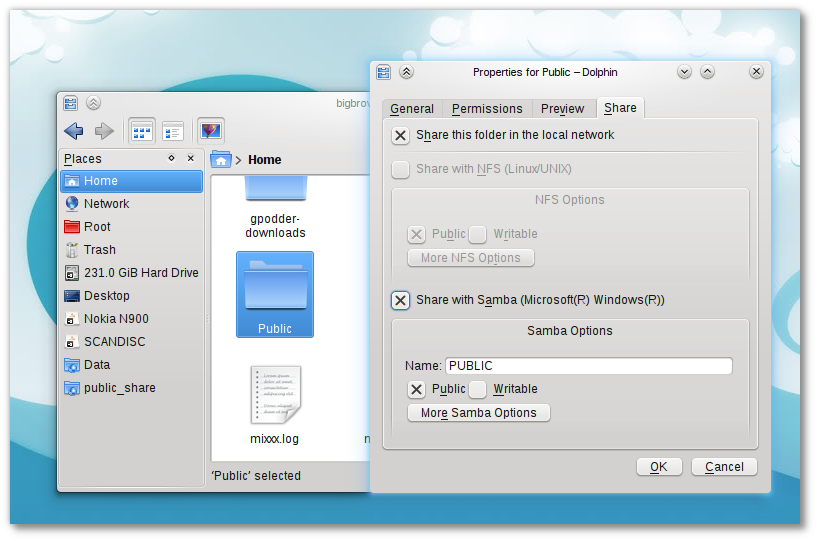 Once Installed, sharing any Folder via samba becomes a matter of point and click ™.

There is a minor annoyance with the repeated button actions. e.g things using the volume key on your laptop for volume control or the multimedia keys to control amarok always skip two step forward or backwords.
Fortunately the fix to this problem is very easy. Start kde Systemsettings and go to keyboad and mouse under the general tab. You would see the “enable keyboard repeat” already checked. Uncheckit and click apply. Then check it again and click apply. Doing this Surprisingly that solved the problem for me.

IMHO Kubuntu is the best Kde Distro I have tried. It very close to the kde upstream and provide a solid Ubuntu base for stability. It really not easy getting a compilation of everything I did to customize my Kubuntu to suit my everyday needs, probably left out somethings. If you have some tips or recommendation of your own please share.  I hope someone out there find this useful.

Dirty Fix for Yahoo Kopete Issue in Kde 4.4 on Kubuntu

Why You Should Never Steal From a Linux Admin