Big Brovar job is not that hard as you think, but it’s not like i will just watch some ubuntu web server tutorial and yeey i will become expert in using ubuntu server tools. Ubuntu users guide can come in handy but at the end of the day experience is what you need for most of the situations.

Having a job that house you and feeds you free of charge, while at the same time paying you for something you already enjoy doing and would do for free anyway (thank God my Boss doesn’t read blogs) isn’t such a bad thing right? so i shouldn’t even rant right? …. well its not that quite easy .. look am far from home (no where can ever be like Lagos) which means am far from my friends and geek squads ( OK i and the network admin are good friends without him i would probably have dead for lack of someone to speak geek to ) .. far from my Girl (and every other consequences that brings.). and that is not the worse part .. the school where i work is in the middle no where. the closest human settlement to us is some village 30min work from the school. and yeah i have been to the village its nothing to write home about. So you can feel my pain .. OK OK agreed am just some ungrateful SOB that should just be glad i have a job .. yeah i know. but that doesn’t remove the fact that it can and does really get boring here ..

But there is also a good side to the boredom (aside the good work conditions and salary that is) i get to learn more about Linux, and as you might know ( or ought to know) its never a dull moment with Linux. there is always something new to try out. so decided that i would need a Linux distro for my flash drive. for the following reasons

2 its sound cool to have a Linux OS on a flash drive one more star to my geek barge.

4 It would be handful especially when i need rescue a system that has crashed (like the few widows systems we have here) its would be faster than using a Live CD.

5 might also be handy when i need fast access to the internet. since the distro i settled for booted in like 15 secs and was internet ready.

Last time i tried getting a Linux OS run on a USB i ended up trashing the USB stick and all the data in it. without a bootable Linux. but that was some 10 years ago (actually 6 months but 6 months is 10 years in Linux). so i decided it was time to give it another Go. I choose Puppy Linux because I have tried it before i love it. its annoyingly fast .. and can boot in less than 15 sec.. i grabbed the ISO image from www.PuppyLinux.org and i followed their guide
on how to install it on a usb stick . worked like a charm .. so i rebooted my machine a Dell xps m1330. told it to boot from usb (press F12 at boot) Puppy asked me some questions about my keyboard (UK qwerty ) whether i wanted xorg or vesa choose xorg , and my monitor choose the one with 24 option beside it. secs later am booted into a desktop that has everything i need. music player, video player, word processor, browser, a chat clients, an image editor etc i even played some mp3 files from my computer hard drive (yeah it even mounted the computer drives) and it worked… its amazing how such array of applications can be quashed into something not better than 90MB. and did i say everything worked out of the box. i was able to connect to a wireless network and using the ever reliable SeaMonkey browser i was on the net surfing happily. The System was blink of an eye fast. …one click beeeem …one click beeeeeem. i tried it on a lesser system with just 256 mb and there was no different in performance between that and my 4 gb ram laptop. once done i told it to log out and it asked if i wanted to save my session ( if you don’t do this any settings you make doing the usb session wont be saved) so i said yes and called the session bigbrovar. i logged into the “slow” world of gnome fired gparted and labelled the usb drive Garfield ( yeah my partner is always ranting about how much i suck at names after i named a test server …. test server). no sooner have i installed it was Garfield was called to action. a colleague’s vista crashed and wont wake up. her Ethernet port is bad and when we tried the intrepid live cd .. it wont detect the wireless .. so we throw in Puppy 20 sec later we were using the wireless to scp her stuff to the fileserver. (we means me and my partner the network admin). yeah Puppy worked were Ubuntu failed. (although i still use Ubuntu for my everyday computing). 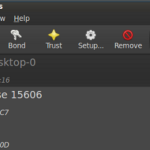