Multimedia Codecs and Tools for Ubuntu

Ubuntu is very rich when it comes to playing multimedia formats like videos, music, photo editing, video editing etc . The default music player for Ubuntu is Rhythmbox music player for playing Videos the default is Movie Player .. But You would find some other cool Multimedia programs like Banshee,Amarok,VLC etc.

But before i start introducing some of the cool multimedia tools available for the Ubuntu Linux Desktop lets start by first installing important codecs that would make it possible to play many of the popular Multimedia formats on our ubuntu Linux box. ( Ubuntu Ships with only free and open source software. hence some popular formats like mp3,avi,mp4 wont work out of the box. because their are not free and open source format. but you are allowed to  install the codecs to play these extra formats.)

In other to make the process easy and because we would be installing a large number of packages its better to use the command-line. don’t worry all you have to do is open terminal (Application/Accessories,Terminal) and copy and paste the commands enter and wait till you are returned to your prompt. You would also be using the package management feature of ubuntu linux and adding extra repository to the our sources.list. Because this guide is targeted at new users i will try to use command which will do most of the needed task at a go so all you need do is just copy and paste.

1- First we enable the Medibuntu Repositories because its contains some important codecs which we would need to play DVDs but which are not included in the normal ubuntu repository due to legal reason.

Then you have to add the GPG Key to authenticate the packages
In a terminal type:
wget -q http://packages.medibuntu.org/medibuntu-key.gpg -O- | sudo apt-key add - && sudo apt-get update

Once done we would now need to install the multimedia codecs

Now we have all the Codecs we would need to play most popular media on Your Ubuntu.

There are like a bazillion of Music players for linux all have their plus and minuses. By default Ubuntu comes with Rhythmbox which is a very simple and stable music player.There is also Amarok which is the must feature filled music player in the world  but its not known for its stability. Personally i prefer Banshee so that is what i will talk about

Banshee has been under the shadow of amarok and Rhythmbox for a long time. not anymore. ever since the project went 1.x its been redesigned and in my opinion the best music player there is now for linux. here are some of its features.

* Video Support Video
All the power of Banshee, now for your videos

* Play Queue Play QueueNew!
Queue up songs, videos, and podcasts on the fly 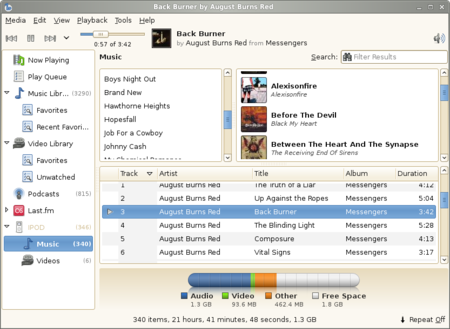 Although banshee is in the Ubuntu repositories. the version there is old. to get the latest version you have to add this to your sources.list.

Adding the Repository key with

or via synaptic by searching for banshee and installing it

There are also quite a handful of Video players available for linux. By default ubuntu ships with Totem which is cool and gets the job done, but i prefer VLC which is a no nonsense video player that is notorious for playing just about anything you throw at it. 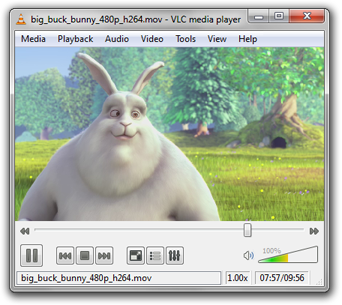 Search for vlc and install it. You should also install vlc-plugin-esd, mozilla-plugin-vlc (and libdvdcss2).

or from command line

I don’t do much audio editing. Just the basic editing to allow me get by. Fortunately most average Desktop users are like me. There are quite a large number of tools that can me used for audio editing on Ubuntu here are some popular ones.

Audacity is a free, easy-to-use audio editor and recorder for Windows, Mac OS X, GNU/Linux and other operating systems. You can use Audacity to:

Open synaptic and search for soundconverter

NB If you are using kde Desktop its soundkonverter

I think the name of this app is self explanatory

its an utility to split mp3 and ogg files selecting a begin and an end time position, without decoding. It’s very useful to split large mp3/ogg to make smaller files or to split entire albums to obtain original tracks

Mp3Splt the deb packages can be downloaded from here http://www.getdeb.net/app/Mp3splt double click to install

Video Encoders
Unfortunately this is an area that is still young in Linux. Although there some cools tools that can be used for video editing like Kino,Avidemux,Pitivi,Kdenlive (all in the repositories and can be installed from synaptic) however most are basic tools for simple video editing.

Project is quite cool but its crashes a lot (at least from my experience) although there is a new release in the horizon that looks quite promising however as at the time of writing this there is yet to be an Ubuntu package. the older out dated version is in the Ubuntu repository but there are binaries for other versions of Linux can be downloaded here http://www.kdenlive.org/user-manual/downloading-and-installing-packages . and can be installed from synaptic (although i do not recommend it because of its frequent crashes)

– The kdenlive 0.7
Video Editors Unfortunately this is an area that is still young in Linux. Although there some cools tools that can be used for video editing like Kino,Avidemux,Pitivi,Kdenlive (all in the repositories and can be installed from synaptic) however must are basic tools for simple video editing. Kdenlive Project is quite cool but its crashes a lot (at least from my experience) although there is a new release in the horizon that looks quite promising however as at the time of writing this there is yet to be an Ubuntu package. the older out dated version is in the Ubuntu repository but there are binaries for other versions of Linux can be downloaded here http://www.kdenlive.org/user-manual/downloading-and-installing-packages . and can be installed from synaptic 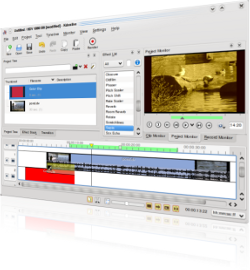 Once in a while we are always faced with the need to encode video from from format to another. maybe for our ipods or mobile phone . Linux has quite a handful of tools that can be used for video encoding.There is Avidemux which is in the repository and can be installed from synaptic. Cool tool that can be used for everyday audio encoding is WinFF

WinFF is a GUI for the command line video converter, FFMPEG (FFmpeg is a powerful Free and Open source program that can record, convert and stream digital audio and video in numerous formats. It is commandline based). It will convert most any video file that FFmpeg will convert. WinFF does multiple files in multiple formats at one time. You can for example convert mpeg’s, flv’s, and mov’s, all into avi’s all at once. WinFF is available for Windows 95, 98 , ME, NT, XP, VISTA, and Debian, Ubuntu, Redhat based GNU/Linux distributions. WinFF is available in Brazillian Portuguese, Bulgarian, Chinese Traditional, Danish, English, French, German, Italian, Polish, Portuguese, Spanish, and Turkish.

you need to add a third party repository to your sources.list.
First we had a verification key. open terminal and copy and paste this

Then we had the repo to your sources

Then we install with this command

You can read more about winff installation here http://code.google.com/p/winff/wiki/UbuntuInstallation

They are quite a handful of tools that can be used for Ripping dvds videos from the Disk to your computer. however there are two tools that i find very easy to use and very stable to use. one is more of a DVD backup utility the other is a tool for converters DVD videos to other format.

K9Copy is a program that allows you to copy DVDs in Linux. It is similar to DVDShrink, and has the following features:

* The video stream is compressed to make the video fit on a 4.7GB recordable DVD
* DVD Burning
* Creation of ISO images
* Choosing which audio and subtitle tracks are copied.
* Title preview (video only)
* The ability to preserve the original menus.

GUI
open synaptic and search for k9copy install from there

HandBrake is a software application that can convert MPEG video (including DVD-Video) into a MPEG-4 video file in .mp4, .avi, .ogm, or .mkv containers.

there are quite a number of tools that can me used to make dvd/vcd videos for home use. out of the lots the best in my opinion is devede. its very easy to use and intuitive. DeVeDe project creates video DVDs, suitables for home players.
DeVeDe can create video DVDs from any number of video files, in any of the formats supported by Mplayer.

The big advantage over other utilites is that it only needs Mplayer, Mencoder, DVDAuthor y MKisofs, so its dependencies are really small.

devede is also available in the Hardy Repo but am not sure if its the latest one. in any case you can download the latest version here
http://www.getdeb.net/app/DeVeDe

Thats it folks. While most of the tools i have writing about are tools that i use to meet my everyday multimedia needs on Ubuntu Linux, They are not a reflection of what is best (which is actually subjectives really)
Hope this helps some body.